The late Bob Cain was the proud builder of a series of glass bottle structures located on his farm just north of town. In 2007 a committee moved these structures into Tre . . .

The late Bob Cain was the proud builder of a series of glass bottle structures located on his farm just north of town. In 2007 a committee moved these structures into Treherne to the corner park at Railway Avenue and Alexander Street. Bob Cain and his wife Dora built their first structure, a one room house made of approximately 4,000 glass bottles, in 1982 with the help of Fred Harp. The couple got the idea after seeing similar creations in Redlake, Ontario. It took them nearly three years, beginning in 1979, to collect enough bottles to begin construction, but with Dora cleaning and pealing labels, the men were soon at work. After two months of dedicated labor, the first glass house was complete. Inside this house, collections of antiques and foreign bottles were displayed. Soon after, in 1983, the trio decided to build a church using approximately 5,000 bottles. This structure took nearly 3 months to build, but when it was complete, they were able to furnish it properly. Bob made a pulpit, an organ was donated from the Anglican church in McGregor, and a few stained glass windows were donated from the Anglican Church in Cypress River. From a house in Winnipeg, Bob found some old church pews that he cut in half and added to his collection. In the years to follow, three weddings took place in this church, along with numerous services from time to time. Bob and Dora watched as the tourists began to pour in, and after receiving over 7,000 visitors in one summer, they figured it was time to build a few final additions: a wishing well, and a fully functioning outdoor washroom. So in 1987, they put up a well using approximately 500 bottles and a bathroom using over 1,000 bottles. Bob and Dora’s son, Joe Cain, was a plumber, so he was able to install a flushing toilet and a sink with running water. Courtesy www.treherne.ca/pages/glassbottlehouse.html 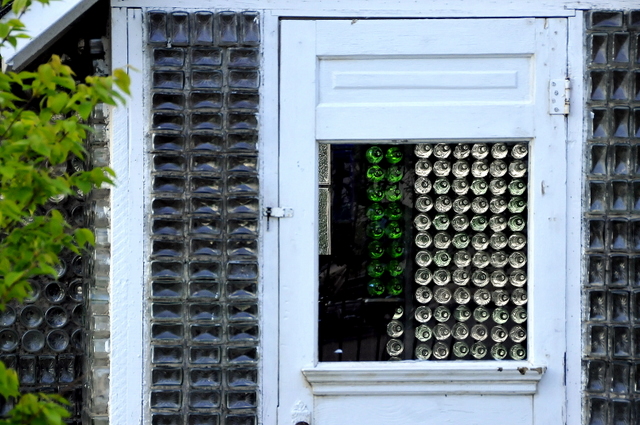