The Ile Saint-Jean Campaign was a series of British military operations in late 1758, during the “French and Indian War”. Its purpose was to . . .

The Ile Saint-Jean Campaign was a series of British military operations in late 1758, during the “French and Indian War”. Its purpose was to deport the French-speaking Acadians living on Ile Saint-Jean (present-day Prince Edward Island) and open the island to English and Scottish settlers. Such was the reward of the British “Conquest” at Quebec in 1759.

The panel depicts Lt. Colonel Andrew Rollo on his way to take possession of the island, backed by 500 British soldiers. Of the 14,100 in the region, an estimated 11,500 Acadians were deported.The deaths of deported Acadians made Rollo’s one of the deadliest of several British campaigns to enforce The Expulsion (1755-1762).

Many of the Acadians were sent to the Thirteen Colonies (now the United States), England and France.  Longing for North America in their exile, many of the deported again crossed the Atlantic to make new lives in Louisiana, then a French colony. New Orleans continues to enjoy the lively “Cajun” culture of myth and reality.

In French  Canada Britain’s action was variously known as the Great Upheaval, the Great Expulsion, the Great Deportation and Le Grand Dérangement, a bad pun in English. 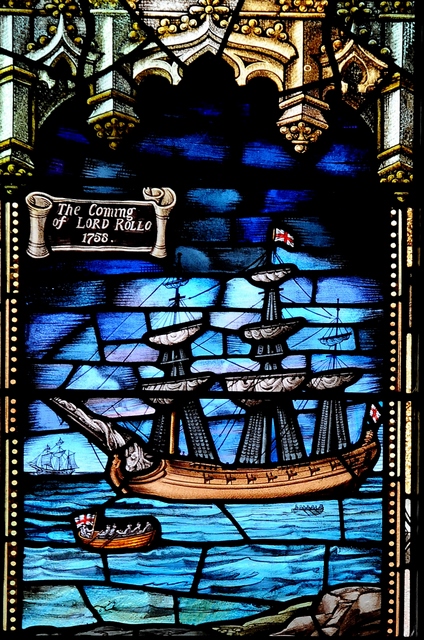