Widely regarded as ‘one of the artistic triumphs of [the 20th] century’, the window was revealed at St Bartholomew’s in 1919 by HRH the Prince of Wales. The window was co . . .

Widely regarded as ‘one of the artistic triumphs of [the 20th] century’, the window was revealed at St Bartholomew’s in 1919 by HRH the Prince of Wales. The window was commissioned in 1916 by Queen Victoria’s “favorite son” Prince Arthur, Duke of Connaught, who was Canada’s Governor General at the time. This world-class masterpiece is also considered by many as the finest window in Canada.

The window is a memorial depicting images of mourning men and women. Wilhelmina Geddes uses primitive colours in her Ottawa Window. It is said by a critic that the colours used in this piece “give the window power and drama while strong, expressive drawing brings out the sense of action and facial expression.” An article in Irish Life featured the window on the cover of its Christmas 1919 issue. Geddes completed the entire window in Miss Pursor’s glass works, Upper Pembroke Street in Dublin, Ireland. – Wikipedia

The illustrious Irish glass master Wilhelmina Geddes spent over two years creating this brilliant memorial to the dead of the Great War. It has been referred to as “The Ottawa Window” by international admirers of Geddes’ work.

Life size legendary warriors  occupy the upper panels, symbolizing the men sent to the war. Below them, exquisite portrayals of mourning women – mothers, sisters and lovers left behind in sorrow – fill the border with grief.

A 1994 article on this window in the Irish Arts Review by Prof. Shirley Ann Brown of York University is here. 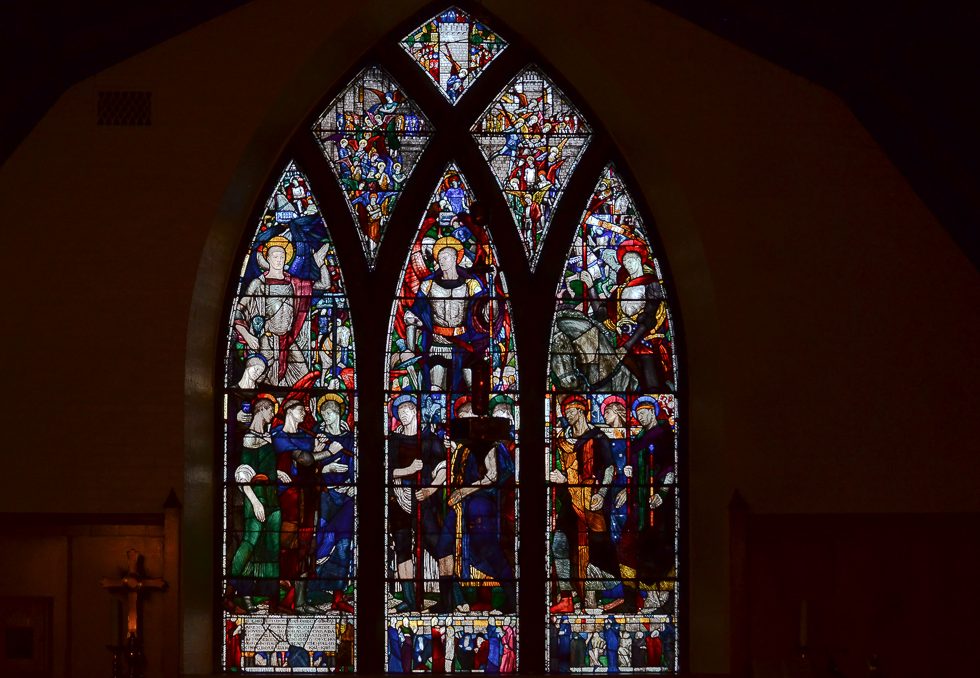