This is the only known window depicting Louis Riel, beloved today as the “Father of Manitoba”. M . . .

This is the only known window depicting Louis Riel, beloved today as the “Father of Manitoba”. More than 130 years after his death, we strongly believe that Canada should commemorate this great Canadian in more stained glass windows.

Thomas Scott (1842-1870) was an Irish-born Protestant Canadian charged with insubordination against Riel’s Provisional Government of 1870 in Fort Garry (now Winnipeg). Scott was tried and executed by firing squad for plotting with the Orangemen to overthrow the largely Metis rebel government of the Red River Settlement.

For his part in this, and in a second crushed-by-Gatling Gun rebellion in Saskatchewan some 15 years later, Riel was tried as a traitor, and was himself hanged at Regina, in 1885. Some feel his execution was partly in retribution for the execution of Scott. 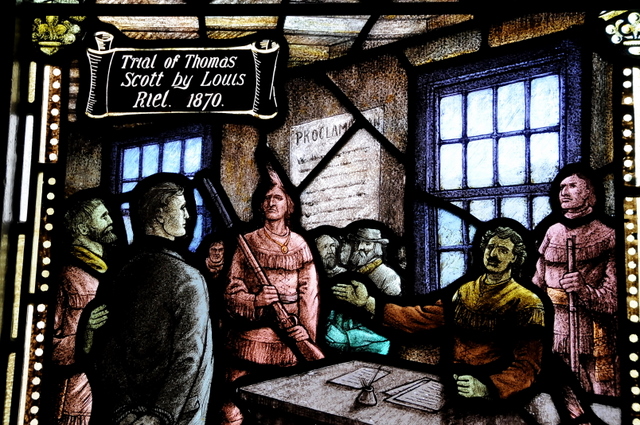