History of Canada in Glass  LANDING PAGE: 98 photos with text.

A British official reads the Order of Expulsion to distraught Acadians in the Maritimes, 1755. The Expulsion occurred during the “French and Indian War” between Britain and France in mostly American regions.

The British Conquest of Quebec and Acadia had occurred more than 40 years earlier in 1710. Stubborn Acadians refused to pledge allegiance to Britain, and conducted militia actions against the British while maintaining supply lines to the French forts at Louisbourg and Beausejour.

The expulsion of all Acadians was finally ordered by the frustrated British governor Charles Lawrence, without distinguishing between peaceful and rebellious Acadians. Le Derangement led to the deaths of thousands, and lost the sympathy of many proto-Americans living in what would become the United States in 1776. 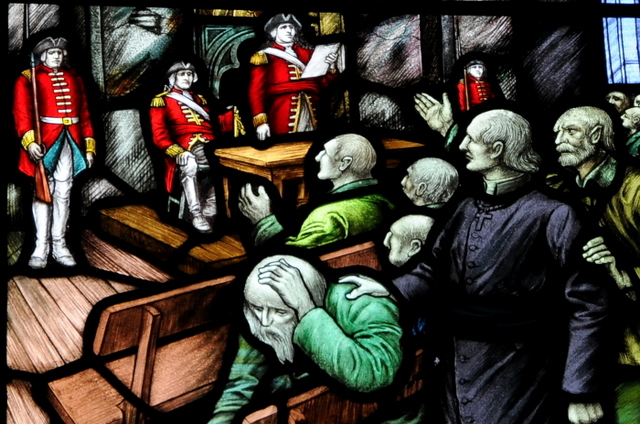