“A particularly striking enunciation of the unity between soldier and Christ is the memorial window of Carmichael United Church to Regina, de . . .

“A particularly striking enunciation of the unity between soldier and Christ is the memorial window of Carmichael United Church to Regina, dedicated on Armistice Day 1928. It is a stained glass rendering of James Clark’s painting “The Great Sacrifice,” and depicts a dead soldier lying at the feet of Jesus. Peace and composure are reflected on the face of the soldier. His hand covers the wound on Christ’s foot, affirming the link between his own suffering and that of the Saviour. Above the soldier stands Jesus, His palms facing out to display His stigmata. With this gesture, He recognizes in the soldier’s wounds and death a community of sacrifice: His struggle is the soldier’s struggle, and vice versa. Surrounding the central figures is the detritus of war: to the right of Jesus, the ruined tower of the Cloth Hall in Ypres and behind the soldier, the remains of the market square of Loos, near Lens. In the distance, two airplanes hover over the desolate landscape.

It is a remarkable image, more effective in stained glass than in the original painting, and reveals the persistence of the religious interpretation of 1914-1918 in postwar Canada.
It confirms the belief that the war was indeed a struggle for the survival of Christianity, and that each soldier who died shared a special bond with Christ. The sacrifice of Jesus may have been “solitary and unique,” as a Toronto clergyman said in 1919, but the sacrifice of the soldiers was
‘after the manner of Christ and also according to his purpose.’ “ 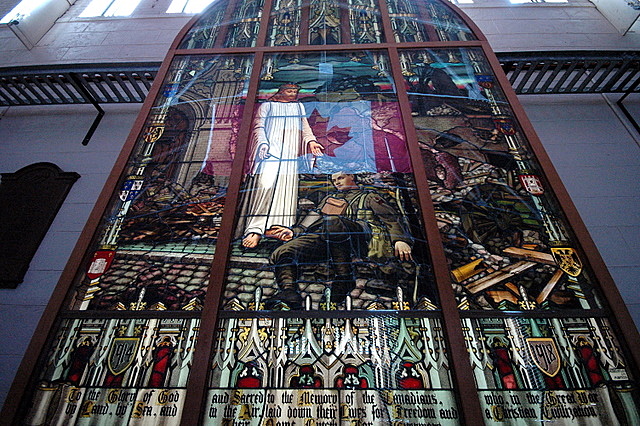