Which Saint Teresa is this?

Which Saint Teresa is this?

There are two well-known Saintes Therese in Catholic history: Teresa of Avila, Spain (1515-1582) who reformed the large but controversial Carmelite Order;

and Theresa of Lisieux, France (1873-1897), known as “The Little Flower”, who became a Carmelite hundreds of years later, and is one of the most popular of all saints along with St Francis. St.Thérèse is best known today for her spiritual memoir, L’histoire d’une âme, The Story of a Soul.

Apparitions of Christ to Teresa of Avila indicate that she is the saint depicted in this window.

FAMOUS CARMELITE, TERESA OF AVILA
by Diana Severance, Ph.D.
Famous Carmelite, Teresa of Avila
The Carmelite order (Order of Our Lady of Mt. Carmel) was founded by St. Berthold in Palestine around 1154. Claiming descent from hermits who had lived on the mountain in Biblical times, it became an order devoted to poverty and meditation. The Carmelites achieved great success under St. Simon Stock (c. 1165-1265) an Englishman, who was their General from about 1247. Simon had a vision in which he was given the highly improbable assurance that anyone who wore the scapular (shoulder cloth) would be saved.

One of the most distinguished of all Carmelites was St. Teresa of Avila, who stands beside St. John of the Cross and St. Mary Magdalene di Pazzi as a great mystic. She was declared a Doctor of the Church in 1970, setting her alongside Augustine, Ambrose, Gregory and Jerome. To date, only about thirty people have been honored with that title. 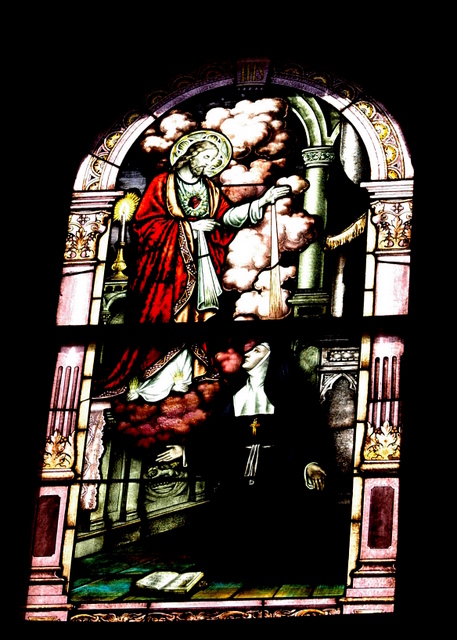