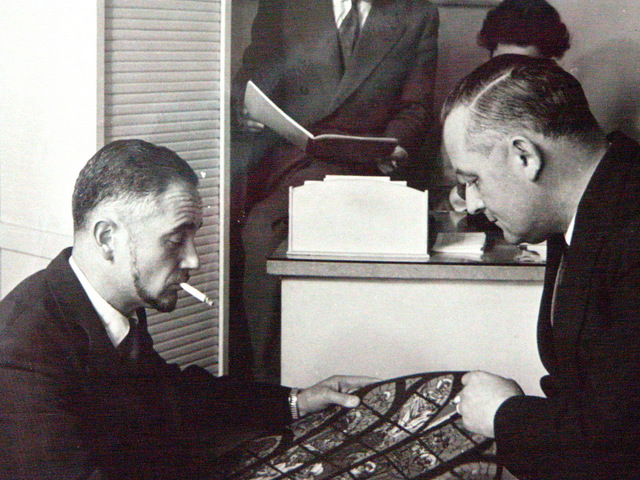 Between 1948 and 1990, the Rault studio of Rennes (Brittany) created original suites of windows for nearly one hundred churches, cathedrals and chapels in seven Canadian provinces, and in eight American states. 200+ Rault windows on the ISGC site.

Throughout the 20th century the atelier made innumerable restorations as French churches and cathedrals were rebuilt after the German bombings of both “great wars”. Over the past 120 years the studio also created original designs in an estimated two thousand buildings in France. Their work is prominent in churches, colleges and monasteries throughout the large region of Brittany.

The studio has been known by three names through the 20th century, beginning with that of the founder Emmanuel (active 1895-1936) who founded Vitraux d’Art E. Rault in 1898 after apprenticing with the firm of Lecomte et Coline. Emmanuel’s sons Paul and Andre grew up in Rennes, the leading city of Brittany. Like their father, they became maîtres verriers according to the ancient French tradition of apprenticeship and formal training, studying at L’Ecole des Beaux Arts in Rennes, where Paul Gauguin had been a local hero. Their distinguished accomplishments began early, undertaking independent projects, and collaborations with mainstream artists such as one in Paris with Maurice Denis (College Picpus, c. 1930). As young men they were named Best Stained Glass Artists in France at Paris expositions in 1932 and again in 1937. To help restore the massive damage to French churches during the Second World War, the Rault brothers constructed a large building in central Rennes to accommodate their studios, furnaces and workshops. By 1947 the studio had grown to 98 employees, from designers and artists to furnace workers, glass-blowers, cutters and assemblers. In the 1960s through the 1990s the studio was known as Rault Fréres under André Rault (1912-1997) and his brother Paul (1909-1962). The brothers are considered the master artists of the Rault oeuvre.

Like many French glass artists in the 1920s and 30s, Paul and Andre became  fascinated by a breakthrough technical innovation known as dalle de verre (called “slab” or “faceted” glass in America.) The availability of natural gas from Africa allowed far hotter furnace temperatures than the traditional charcoal fires, and molten glass in large batches could at last be made. Studios were no longer restricted to the classic mouth-blown glass spheres which, while still the primary medium, yielded a sheet of limited size, and usually only 1 cm thick.

The rich possibilities of the new material led the Rault brothers to endless experiments with its decorative possibilities.  Every autumn, in improvised outdoor factories, workers would bravely don asbestos mitts and fire-proof helmets to melt vats of sand laced with various metallic oxides over high-temperature gas-fired burners.  The resulting slabs were cut into chunks whose edges were chipped with silversmith’s hammers to create the effect of raw jewels, enlivened by random tiny bubbles and streaks of colour. Dalle set in conventional lead cames (channels) became a unique characteristic of Rault installations, adding a three-dimensional element to what had always been a two-dimensional medium. While other studios set the very heavy dalle in a cement matrix, filling the gaps to the glass surface, the Raults insisted on using lead cames, allowing the faceted edges to reveal their radiance, and refracting the maximum light possible. When backlit by sunlight the radiance of their dalle compositions is ravishing.

The famous dalle master Gabriel Loire spent most of the 1930s working with the Rault brothers in their Rennes studio before founding his own studio in Chartres. Among other technical discoveries, they successfully re-created the elusive blues of Chartres Cathedral, long a quest of French glaziers.

The Rault style is eclectic, often a fusion of medieval French religious imagery with a modernist quality. They incorporate symbols within experimental dalle de verre with a 20th century directness, and a freshness that was often lost in the elaborate styles of the 19th century. They hated to repeat themselves as so many studios did. Elements of 20th-century art movements such as Expressionism, Modernism, Art Deco and even Pop Art are sometimes present: their decorative motifs and symbol details are more likely to suggest Henri Matisse than William Morris. In addition to the figurative works often demanded by clients, they created semi-abstract and non-figurative designs. Their modern interpretations of medieval Christian symbolism can be especially charming. The Raults made major restorations in many of the great churches of France after both the First and Second World Wars. This extensive exposure to the rich history of French glass technique – in which ancient glass is required to be authentically replicated beginning with the silicon of sand itself – led the Raults to a deep understanding of the technical and artistic practices necessary to achieve a wide variety of styles and effects. After restoring windows in countless bombed churches of Brittany after the war, the Raults looked abroad for new clients:  Canada presented an opportunity. The Montréal church supply house of Desmarais & Robitaille became their agents in Eastern Canada, where over 30 installations — some costing as much as 15 million francs — were eventually completed, in Montréal, Québec City, Louiseville, Yamachiche, Chicoutimi, Alma, Amos and other Québec towns.  Work was also commissioned in Ontario, New Brunswick, Massachusetts, and New York state.

In Western Canada the firm of Burns-Hanley Church Supplies of Regina, Saskatchewan represented Rault Frères. Every year, from 1948 to 1977, André Rault would travel to the West to meet with potential clients in churches and convents; they would subsequently be sent beautifully coloured maquettes of proposed designs. In the early days of their lifelong friendship, Andre and Wilf learned each others language in order to communicate by mail between France and Saskatchewan. Fortunately, my mother Emma was French-Canadian and would often translate for them during Andre’s annual summer visits.

Eventually, over 60 large and small installations were completed in the West, primarily in Saskatchewan and Alberta, as well as in British Columbia and the U.S. Notable installations include Holy Rosary Cathedral and Blessed Sacrament Church, Regina; Cathedral of the Assumption, Gravelbourg; St. Joseph’s Seminary, Edmonton, Notre Dame College, Wilcox Sask; and three St. Patrick’s churches, in Medicine Hat, Lethbridge and Edmonton, all in Alberta. Small cathedrals in Whitehorse, Yukon and Yellowknife, Northwest Territories have the most northerly Rault work anywhere. In the western U.S. there are Rault ensembles in Omaha, Nebraska, Spokane and Seattle, Washington; a large installation at St. Paul, Minnesota; and in Libby, Montana and Huron, North Dakota. The Rault tradition continues in Rennes, under André’s son Frédèric (active 1877 to 2007); and currently under his son Sébastien, as Les Maîtres-Verriers Rennais, the longest continuously operating stained glass studio in France. Frédèric was commissioned in 2000 by the French Heritage Department to replicate the massive 15th-century grisaille windows in the nave of the exquisite Chapelle Royale at Chateau de Vincennes, Paris, after its windows were severely damaged by a wind storm in 1999. (Photos to come).

In addition to their many installations in France and North America, Rault work can be seen in churches, synagogues and mosques in Egypt, Morocco, Haiti, Portugal, and Rome.