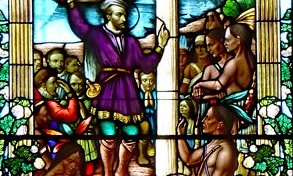 Only few artisans built the stained glass heritage in Quebec. It is essentially a religious heritage. These windows were created over a period between 1900 and 1950 approximately and it coincides with the golden age of churches construction in the province. Before and after this period, the production is sparse and stained glass is often imported from France, England or elsewhere.

The work is of very fine quality. Churches that had generous donors have provided beautifully crafted stained glass windows while the less privileged churches had no stained glass at all. Some artists have produced outstanding works where buildings were classified and protected.

A so large collective works concentrated in churches that nobody attends anymore arises the issue of protecting that heritage… read more.