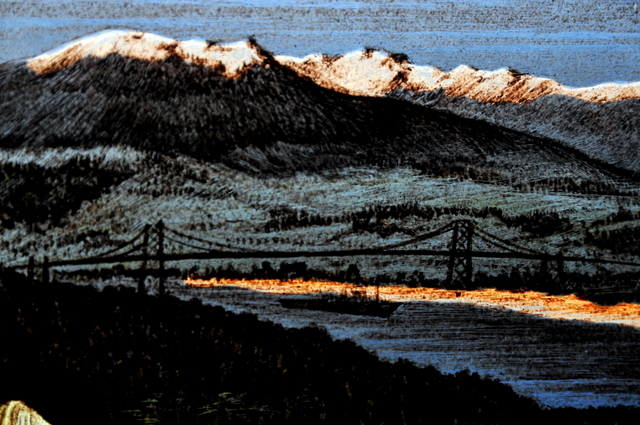 In the 21st century, Canada (and the world) is overwhelmed by a tsunami of imagery. Who looks at stained glass any more? Unexpectedly, our site gets about 10,000 visits a year, averaging 3 minutes per visit.

The Institute for Stained Glass in Canada is a not-for-profit educational society based in Vancouver, registered since 2007 under the Societies Act of British Columbia. Thanks to grants from heritage agencies in Alberta, Saskatchewan, Manitoba and Vancouver, we have documented buildings and windows in ten provinces and territories. Thousands more windows from the 1850s to the present need to be recorded before they disappear.

With the steady loss of thousands of Canada’s irreplaceable historic churches, the ancient and modern art of stained glass is widely overlooked in Canada. How come?

Unfortunately, the various Heritage and Archival agencies in Ottawa have proven indifferent to this subject. Are they still frightened of religion or simply lame? Ottawa’s stance is perplexing and dysfunctional, while the Library of Congress has the vision to be a genuine archive.

An enormous range of traditional and contemporary styles – in churches, synagogues, mosques, reserves, court houses, libraries, hotels, hospitals, schools, legion halls, legislatures and college buildings – reveals what is still among Canada’s finest examples of early public art.  Only a very few books on Canadian stained glass have been published, but you can check Amazon.

We are a small group of photographers and researchers based in Vancouver, with collaborators in Québec, New Brunswick, Nova Scotia, Ontario, Manitoba, Saskatchewan, Alberta and British Columbia. Our Board includes several well-known British Columbians. The Institute site has no ads and no commercial interests. We depend on support from heritage agencies, foundations and help from people like you.

Please consider supporting our work on behalf of your province or community.

We began to photograph stained glass in Canada in 2001

… and have discovered an unexpectedly diverse “distributed collection” in a wide range of secular and sacred public buildings. We estimate fine public windows in Canada to number well over 100,000 (with many more in private homes). There is as yet no comprehensive book describing Canada’s massive and significant stained glass inventory. We plan an increasingly interactive user-oriented web site, culminating in an authentically national presence. We hope our presence on the Web will lead to articles and books about this oddly neglected aspect of Canadian history and culture. You and your community or organization are warmly invited to join in our work of documenting the Canadian dimension of the noble and ancient medium of glass. Patrick Burns, Vancouver

Our goal is to raise awareness of Canada’s extensive — and often delightful — range of stained glass, and its context within both traditional and modern work in other countries. We hope this archeology of the recent past will help preserve Canada’s stained glass inventory, and the often irreplaceable buildings in which it is found. For a variety of reasons, this ancient art and craft has been largely overlooked by the Canadian academic and heritage communities. There has not yet been a comprehensive book on stained glass in this country. The Institute is attempting to create a representative survey of an estimated one hundred thousand interesting windows across Canada. We invite our heritage counterparts in every part of the country to join this effort. We hope that the photos on this site will lead to buildings themselves becoming more accessible to the public, so that people can experience these works of art and history for themselves. Our focus is on works made in the 19th and 20th centuries, which in many cases are at risk of anonymity, of disappearance from the public realm, or simply of uncaring destruction. We also celebrate the 21st century Canadian and international artists who continue to expand an astonishing range of technical and artistic discoveries in glass.

Thanks to Our Sponsors